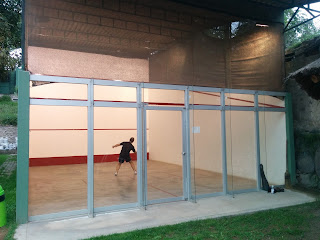 I found a Squash court in Araquipa! First time on a court this month - I was getting a little twitchy. Good day!
No-one here seemed to know of Squash, but a young lass thought that there was something a bit like a court with three walls near the tennis courts at "the Club". The Club, it turns out, is a VERY extensive property with an impressive infrastructure for each of perhaps 20 sports. Sure enough, right out the back, behind the 20 clay tennis courts is a single, open air, glass back squash court. Yippee!
I must admit, it was my first time on a Squash Court with a concrete floor. Tricky thing a concrete floor - when some bits are grippy and other bits shiny. When the ball bounces on a shiny bit it skids thru low and fast, but sits up OK on the grippy bits. Also a bit tricky to see the ball against the grey floor with areas of direct sunlight. There must be some grippy bits on the walls too because there was some  weird-ass spin on the ball at times. We are talking major home court advantage here! So volley at all costs and if it does bounce then watch the ball real close - and be ready. Before long I noticed one more wee little challenge: altitude = 2350m. Like that is higher than Mt. Kosciuszko!
Just need to find some of the local talent now!
Email ThisBlogThis!Share to TwitterShare to FacebookShare to Pinterest
Labels: Peru, Squash

And the stray begins

Our South American stray has begun.

After a couple of weeks in NZ bidding a final farewell to Doug & Barbara Hutton, a trans-pacific leap to Chile, a hop to Peru, and a skip to Araquipa, we have landed in the Llama Education Spanish School. We will be here for 3 weeks living with Maria and her two daughters in a typical Peruvian household, and taking 2 x 2hrs Spanish lessons daily. The first couple of lessons were pretty strenuous. New words slid off our brains like boiled eggs off a wet plate. The Spanish have made a couple of additions to the alphabet and changed the sound of the other 26. Words have a randomly selected gender which infects the entire sentence and a single plural introduces its own mayhem. But heck, Spanish is a snap compared to Chinese.

Meanwhile EC22 is making its way to Valparesio, Chile on the good ship NYK Leo. We stuffed her in a red 40' hi-cube shipping container in mid-February. Unfortunately, 20' hi-cube containers are not available in Australia (in any color). The red one was loaded onto the OOCI Texas thru to South Korea (with a one week stop-over) before boarding the NYK Leo. EC22 is happily insured for the transit, which excludes loss due to nuclear explosions but does cover the red container falling overboard, or being jettisoned (apparently necessary when the vessel develops a list because a yellow container fell off the other side).

EC22 is devoid of water, fuel and food but the rest of our kit is on board including a few new toys. We have a new two person, inflatable kayak in the back right locker. We are very much looking forward to exploring the calmer water ways as we move about, but reckon the optional kayak deck and some light wetsuits will be in order in the southern waters. Also, we have a new tablet loaded with 20GB of maps and 46,000 Wikipedia articles. Whether it be a goat track or an interesting rock we will be on to it. We also, have a new macro lens so keep an eye for our photos of the very small on this stray.

Preparing EC22 for this stray involved the usual maintenance plus a couple of larger tasks and a last minute surprise. The diesel cooktop had become increasingly difficult to ignite and dispite much investigation required expert assistance. Also the auxiliary diesel fuel tank had developed a leak as other Earth Crusers had reported. Not difficult to fix the leak itself, but it was a 5 hour wrestle to get it out and another 4 hours to maneuver it back in again. Then on the final clean under the vehicle prior to shipping, a broken girdle on the primary water tank was noticed; and hurriedly replaced by tired bodies at the 11th hour.

We have some great young friends looking after Mt. Moyhu while we are away. The last couple of weeks in Australia saw the house packed up, loose ends tied, flights booked, and bags packed with the remaining essentials. We got the call a few days out; Anneshka's father, Doug, had passed away after a long illness. So, Anneshka changed flights and departed to NZ three days early. Good news in a lot of ways, as Doug had been destroyed by dementia and only the husk remained. So the incredible era of Doug and Barbara has come to a end, and Anneshka can travel much more lightly.

Now we must attend to our Spanish homework ....