While I cooked a banana cake, a meat and vegie soup and hard boiled the eggs, to use most of the last fresh vegies and bananas, John started the repair on the aft water-tank brackets. First he removed the tank and this took the longest time as the bolts were tight and the hoses(all four of them) didn’t want to be removed. Some boiling water helped. 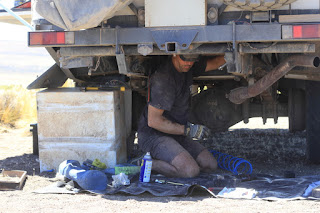 Next he drilled the holes and threaded them. Meanwhile I cleaned the bolts with the die.
All put back together good as new. The forward brackets could not be drilled in the same place as the old ones as the drill is too long. They are just sitting there waiting for the failure of the original strap.
Had a drive around the town. I bought a “Claro” chip so we could have better coverage. I finally found a store to put money on the sim.
We drove towards Chile and just before immigration turned off onto a yellow road and found a campsite between some monkey puzzel trees.

A family were nearby so john took our water melon to them and the rest of our pecans in the shell. Rather give them away than loose them to customs.
44km
Email ThisBlogThis!Share to TwitterShare to FacebookShare to Pinterest
Labels: Argentina

Left our quiet camp beside the road and headed for parque provincial Copahue. Lots of water in rivers and hand dug channels but otherwise very dry region. Got stopped at a road block by 3 police men. Very friendly, only wanted to look at EC’s papers and then we were on our way. Second stop in two days…
The waterfall just inside the parque boundary was neat, a 60m drop into a big pool all edged in orange, very effective. The vulcanites are colored by the action of the acidic water which generates iron oxides and hydroxides. The river banks for the last few hours have been this lovely orange color.

Copahue a town with the termals in the middle was very touristy and we just drove around and back out. Just before the ski town of Coviahue we stopped on the edge of a lake for a cooked lunch of stir fried pork. 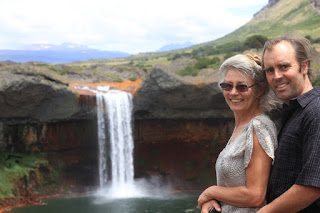 Had a look in the ski town and got an edge connection. Finally got through to Rodrigo about our service and it has been bought forward to Thursday, so lots of fruit to eat before the crossing. Chile customs will take all fresh fruit and vegies, uncooked meat and eggs. So a bit of cooking to do. 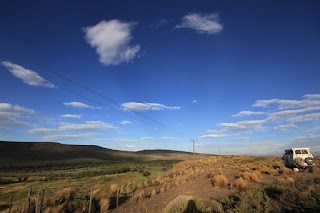 Camped just above the river on a side track. Just as we entered the track we saw two coppers with bikes chatting in the shade. They didn’t seem to mind us. We pulled off the track onto the sand for the night.
270km
Email ThisBlogThis!Share to TwitterShare to FacebookShare to Pinterest
Labels: Argentina

Had a walk down to the scoria heap for a close up look. Really interesting stuff kind of like slag, all bubble holes and quite light and easy to break. 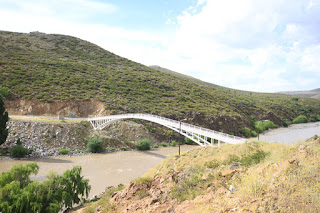 Stopped at Chos Malal for fuel and sat by the river with a little internet. Although only Sunday, we emailed Rodrigo at Kaufmann to ask if we could bring the service forward. 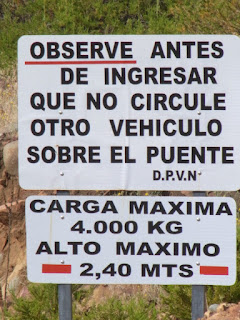 We left about 3pm thinking to drive 100km’s however that didn’t happen. The bridge that we thought we could cross to shorten the loop was restricted to 4 tonne even though it looked strong enough and we thought we might cross it, however they had a height restriction, so it was not to be. This little detour has not turned out to be very interesting. oh well. 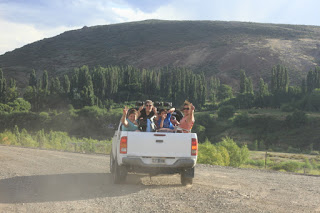 We followed a ute with 4 young people in the back took a photo and they posed and laughed we waved and left them behind. Pulled onto a white road and finally found a camp a little off the road with a view. Just after parking the ute went past with lots of yells and yahoos….
208km’s
Email ThisBlogThis!Share to TwitterShare to FacebookShare to Pinterest
Labels: Argentina

We left our nice quiet camp and headed south on dirt. We had seen some tankers go up the road and yes the road was good. The first part of the day was a bit mundane, then we got into oil fields and lava flows. Once we passed the last small separating plant the road degraded. We tried to escape but were hemmed in by the river. At one stage we drove up through a hill of scoria and the rocks were all sharp and broken. 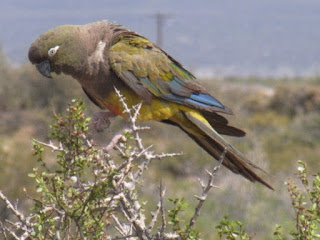 Saw a flock of large parrots feeding beside the road.


Finally got out onto the main road which may have been wider, but was a lot rougher than the track we had been on. We stopped for lunch on the brink of a lava flow. Really interesting stuff.
Rivers tend to go around lava flows. 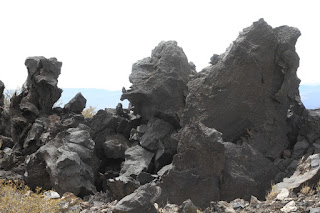 Onto another back road that passes a national reserve Reserva Provincial Domuyo. Sometimes difficult to find side tracks to be able to get away from the main road. The reserve had a road down to a lake and some people were camped a ways from the water up the rise of the volcano Tromen near the end of a lava flow. We decided to go out and camp by the road just above the end of one of the other lava flows.
Email ThisBlogThis!Share to TwitterShare to FacebookShare to Pinterest
Labels: Argentina

A dirt road into Malargue. Finally a supermarket so did a shop keeping in mind our Chile crossing in 8 days, no fresh fruit veges or meat allowed into Chile. Parked at the back of town by a water canal and in some shade. Good internet connection so caught up on emails. Tried to find somewhere to buy more data but most places were closed. They have a long siesta here. Finally found a little then headed out of town.

We were going to do a loop in towards the Andes but a yellow road turning to white and already we are feeling the pinch of a dead line.

We headed for the witches caves. The main road was sealed and fast with traffic. When we finally reached the caves around 18:30 we were informed that the last tour was at 6 and we’d have to wait till tomorrow. Can only camp there in car park no where else in park. This time this was made very clear. However did we have a booking? No then we needed to phone a number for a booking and sorry no reception here. All this in Spanish…….. Challenging.
So we left. 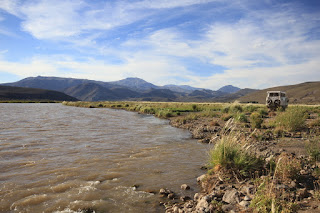 Found a nice little camp outside the park on the river.
Email ThisBlogThis!Share to TwitterShare to FacebookShare to Pinterest
Labels: Argentina
Newer Posts Older Posts Home
Subscribe to: Posts (Atom)