After 3 months we rejoined EC22 in Rotterdam Netherlands. During that time she spent 1 month in Montevideo, 1 month on the ship, and one month in storage in Rotterdam. She was shipped in a container with a vehicle owned by a Dutch couple returning from South America. The shipping went smoothly but the container was chosen for a Customs scan. Obviously all was good - just cost us another €120.

We arrived in Rotterdam at at 8pm on the 11th on a fast (300km/hr) train from Paris. We caught a taxi in the last of the daylight to our hotel where we had single beds - seems the norm here.

About 10am the next day we rocked up to the shipping agents (Hemetex) office where Ralf drove us to EC22. She looked OK and started straight away.

The tires appeared down a little so we topped them up. The open windows had plastic taped over them. The tape did not want to come off.

We paid for the month of open air storage €1.5 per day, and headed back to the hotel for our luggage.

The Netherlands, at least where we have been, is amazing for it’s water, bicycle paths, green grass and motorways. Bicycles often have right of way and have their own traffic lights and lane at round-a-bouts, where vehicle traffic gives way.

Some places are 11m below sea level. Hence the water in the waterways gets pumped to higher levels eventually reaching levels above sea level enabling it to flow out to sea. This originally was one of the jobs of the traditional windmills. 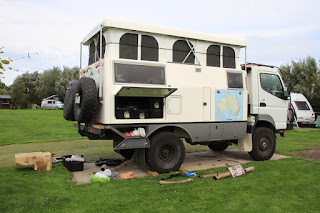 We made the camp ground Polderflora  in Alphen aan den Rejn our initial base. It was close to Webasto (Dusch automotive) service center and the Mercedes services center, and is between Rotterdam and Amsterdam.

We felt we were getting to know the road system and which lanes we needed to be in.

The to-do list was slowly whittled down but some days it seemed that more jobs were added than removed. When we took the exhaust off to take the auxiliary fuel tank out we found that one support had ripped out of the pipe leaving a hole. Another job. The stove was fixed with a new glow plug. And the errors cleared from the log in the heater. However 3 days later when we went to use them neither would start - so booked in for additional attention a few days later.

We have not managed to catch up with Julie and Alex who shared the container with us. They are too busy buying houses and prepare for the birth of their first, due any day now. 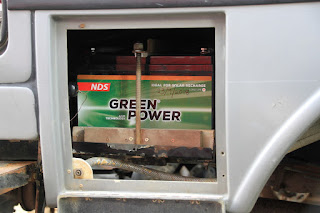 The follow-up visit to Dusch Automotive for the Webasto had us thinking…. The Hoses were full of air!!! Once that had cleared they ran well. Again that night they had air in the hoses! What had changed? Ahhh... finally the penny dropped. When we took the auxiliary diesel tank out we taped up the end of the hoses so dirt did not get in..... Yes we taped up the breather for the diesel tank and when we ran the engine the vacuum sucked the diesel out of the heater and cooker!!!. Problem solved. 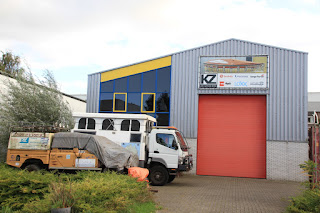 Next we arrived at KZZielmaker to camp in their car park and prepare for the bellows to be removed and replaced. The owner Henk is really friendly and gave given us a key to the workshop so we have use of toilet facilities and kitchen. We also have full use of the workshop!! The bellows came out and were remade and fitted well. The cosmetic cover has been made in less stretchy but cleanable material and took a bit of remaking to get to fit well. But after two days all done. We used their two sided tape to stick on new roof rubber seal which we bought from RubberMax. Also, through contacts of Henk’s we had the aluminum roof rack welded, the exhaust repaired, and new auxiliary fuel tank brackets fabricated. I finally ordered a new inline fuel pump for the auxiliary tank. It is quite amazing how much help he has given us. After 3 nights at his work place he offered us a place to park on his front porch and use of the spare house. 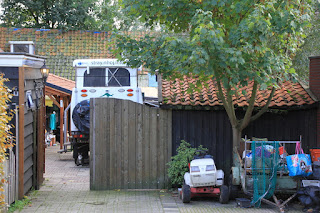 We took them up on that. We ended up spending 10 nights parked on their porch with wake up calls from Puk the pet duck every morning. An amazing family: Henriette the mum found out at 30 that she had ADHD. All her 4 children do as well. The adult children all have work and/or study, are interesting, well meaning and taught us a heap. They were very open (and self aware) of the challenges they had, the medication they took, and what life was like when they didn’t. 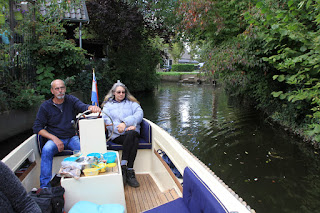 On the first Sunday Henk and Henriette took us for a ticky tour along the canals in their small motorboat. We went up some small windy ones a bit like Venice in places where the housed were right on the canal. A great day with wine and food.

Outside work slowed a little during a few days of drizzle. With the help of Miloa, the eldest daughter, we managed to get an appointment to have our tic encephalitis shots. We drove to the appointment in a shared office building and had our shots. I also had tetanus as by my medical book I had not receive it in 2017 when we were at the travel Doc in Australia. These shots cost us €170. In Australia it was going to be AU$250 each. So half price here.

During our stay I cooked pancakes for breakfast, honey chilli chicken wings and Osso Bucco. John cooked a two curry meal. The family also owns and runs a restaurant and Henk cooks most weekends. The family is always busy which was great to see. 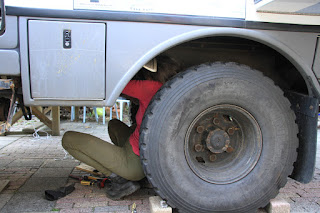 Finally we managed to reinstall the auxiliary fuel tank. This meant the removal the exhaust system and the drive shaft again.... Needed to make a few adjustments to the new brackets so john cycled to Henk's workshop made them and came back, we nearly had it fitted in one day but still had two hoses to deal with…

Our last day (saturday) with Henk and family was a little more relaxed. When finished putting the hoses on the auxiliary diesel tank, we sat in the sun and had a sandwich and glass of wine for lunch. Had a quiet evening with Annabel and Miloa.

We have driven over 1000k’s just running around organizing repairs and trying to buy parts. 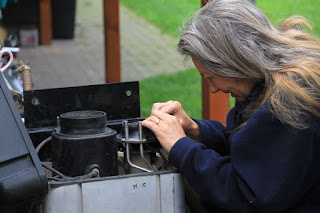