Yesterday I ran over a chook 🐔

In an Earth Cruiser 🚚

And that was that 😲

I nearly wet myself.

The other times I just cried 😂😂😂
Email ThisBlogThis!Share to TwitterShare to FacebookShare to Pinterest
Labels: Chile, EC22, Squash

And the ship came sailing in 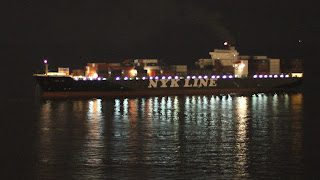 Last night the good ship NYK LEO arrived on time and with quite a number of red containers.

We are looking forward to welcoming EC22 to Chile! 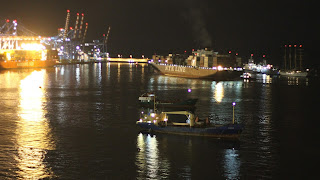 Meanwhile we sit on our airy perch savouring the music of urban dentistry. The rumble of tyres large and small provide a soothing back drop for the gentle chatter of jack hammers and poignant contralto of a flock of angle grinders.

I think John has exaggerated our language skills just a tiny bit…..

On Friday 7th April we rose at 5.30 to have breaky and climb into the taxi for the airport.

Sun was up and it was good to see a bit of  town in the other direction.
It took us a while to check in as they could not find Anneshka’s ticket. Any way we finally got checked in, but Anneshka was told  that her ticket for Santiago had no flight attached and she should contact the travel agent. Once safely one the flight Anneshka’s seat was double booked…. We did find a seat together with a bit of passenger shuffling…

Arequipa did remind us at times of China. The buses were similar but more frequent than Wuyi Shan buses.  Old, smelly, small, crowded & cheap they certainly now how to move people.  Our time here  has mainly been Spanish lessons which have left us pretty well drained, so not much energy for much else. We only did a few touristy things. The monastery was fantastic with its architecture changing over the years with rebuilds after earthquakes.

We country folk were looking for a shower after each trip to town, as the city was very dusty, but relatively free of rubbish. Showers were an adventure in temperature and pressure. The buildings were usually of concrete construction, but the older structures were of wonderfully thick block walls hewn from a nearby volcano.

Our arrival in Lima 1.5 hrs later was uneventful and a taxi (booked inside the airport) duly dropped us off at out room for the day. We had booked in the heart of the old town so we could explore, but after an early morning, a pisco sour and glass of wine (Anneshka) Beer & wine for John and big lunch it was back to the room for a snooze…Late afternoon we caught a bus to the  Circuito Magico del Agua. 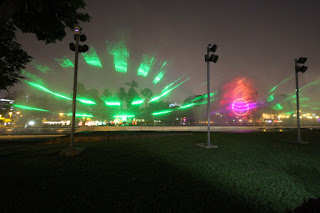 The Magic Water Circuit has the Guinness Book record for the largest fountain complex in the world, displaying 13 distinct fountains and many are interactive. All of the fountains are illuminated at night, many with continuously changing color schemes. A colorful laser light program synchronized with classical and Peruvian music makes the fountains sparkle and shine as the water flows in unique patterns and shapes.

It was a wonderful restful place to walk after towns for 3 weeks. The show was pretty spectacular  it mixed a light show with the water show. The large fan of water became the medium in which they showed pictures and writing. We caught the bus back, found a little but busy restaurant to have dinner in and got an early night.

Up again early 4.45 to have an early breakfast  before our taxi arrived at 5.30. Breakfast was on Peru time, I had a cup of tea and the eggs were still being mixed when the taxi arrived.

All went well at the airport though the flight was delayed an hour. We had coffee and muffin at star bucks as neither of us could face fried chicken!!

We seemed to sit on the tarmac for about half an hour and after 3.5 hour flight finally arrived at Santiago, Chile. John had researched the buses so after getting 750,000 pesos (AU$150) out of the ATM we jumped on the bus for 1500 peso each (AU$3) and headed to one of the major bus stations. Here, after purchasing tickets at 7,200 pesos each (AU$8.50) we had a 15 min wait for the bus and a 1.5 hr drive to Valparaiso. The Valparaiso bus leaves every 15 minutes with two different companies then the next 15 minutes another two companies. Our bus was full.

We arrived at our accommodation on the 20th floor, down town Valparaiso over looking the port and Ocean. Looks wonderful. Wondered out to the supermarket and bought some food. Although we arrived at 6.30 it was still light. We have changed time zone again by 2 hours so now the sun rises at 8 and sets 7.30.  We went to bed at 9.30 wondering why we weren’t really tired…..
Email ThisBlogThis!Share to TwitterShare to FacebookShare to Pinterest
Labels: EC22, Peru, Valparaiso
Newer Posts Older Posts Home
Subscribe to: Posts (Atom)