Went for a walk along the cliffs and up the sand hill to higher cliffs A great view of the bay, blue sea white foam, red beech and yellow sand. We could hear the sea-lions but could not spot them.

Had a long chat with park ranger who wanted us to move again. We were not parked in the designated parking places. He spoke good English. Went for a drive around roads and they had great infrastructure, all new since tsunami in 2010. Toilets were as usual locked. Park is very clean and tidy. 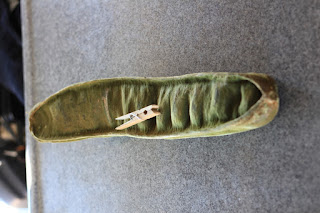 
On our way out southern end of park met fellow travellers heading to Arica to sell car. Been 8 months from Urshwai to Columbia and back. 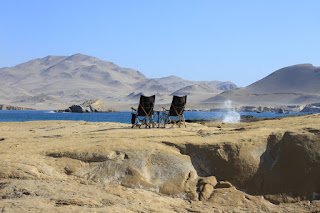 We have notice that most people travel up the Pan America highway only with a diversion out to Cusco. We wonder why this is, yes it is faster, but there is nothing to see except rubbish and dirty little towns it is a terrible impression of Peru when there is so much beauty inland and lovely clean mountain villages with very friendly people. 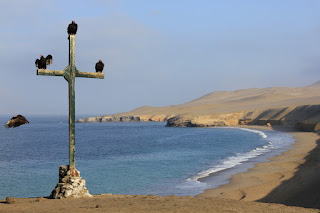 Had lunch on a great beech. John set up the chairs and we had a picnic. Driving south the coastal region was beautiful and one of the prettiest areas we have seen in Peru. The white roads existed on the map only. There were lots of tracks so we stuck to what looked like the most used track through sand dunes. Wonderful to have no rubbish to spoil the ambiance. We navigated OK and found the occasional park sign to welcome us to the beaches.

Camped on small headland by a cross.

Email ThisBlogThis!Share to TwitterShare to FacebookShare to Pinterest
Labels: Peru 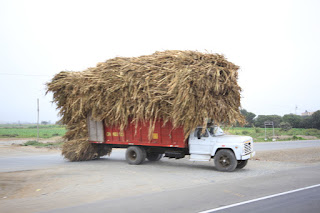 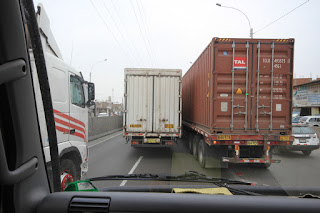 A big day. Drove to the Pan American. A big round-about so we dutifully went around to the right, while others behind us just turn left! We then discovered that the dual lanes were blocked. For the next 100km’s we travel on dual divided highway all on one side or the other. For the initial part we drove in fog at some times it was very thick and I kept the truck in fronts tail lights in sight as I wanted to know where he was. We started to think that we would not make our 400km’s. More rubbish more small towns more speed humps.


There is no by-pass around Lima. All roads lead to Lima. So we suffered the two hours driving through Lima's suburbs. First half was very slow speed humps, traffic. The second half ran much faster and we were through in 2 hours. Anything goes on the high-way. 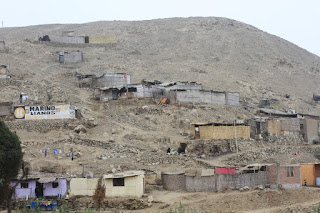 Drove till close on 6 as we wanted to get some miles done in this not so exciting part of Peru. 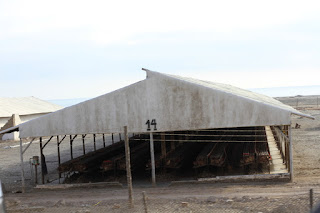 Lots of squatters on the outskirts

Some of the main roads were not on our map…. Filled with fuel and water at villa Tuapc Amaru then headed to Pisco, a peninsula just past Paracas. When we got to the turn off discovered it to be a national park.


There were many of these big sheds along the high way. They are chook-sheds not sure whether for eggs or meat.

Parked by the ocean (after dusk) only to be moved into a camping area by the ranger.
Parked right next to ocean cliff for the night in the dark. Had poached eggs for dinner and crashed…..

We managed 450k’s our biggest day.
Email ThisBlogThis!Share to TwitterShare to FacebookShare to Pinterest
Labels: Peru

Neither of us slept very well and I had a headache. John got me some nurophin at 4:30am, I also felt a little queasy when I turned over. However when I got up at 6am all good.

Tried to drive up the old road above the tunnel but the road got a bit narrow from rock falls. Started to snow a little and the road became impassable so turned back and went through tunnel. Popped  out the other side of tunnel to more snow flakes and poor visibility. 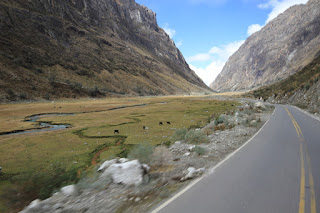 Long switchbacks with a car over the edge. Flat valley floor with yellow  grass lots of cattle. 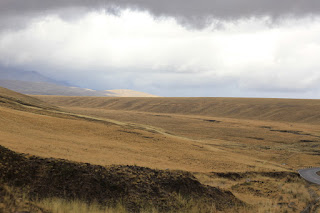 After shopping in Huaraz we drove through a lovely high (400m alt) open valley with mountains covered in cloud.

We descended about 4500m in 3hrs - about two Koscuiscos! 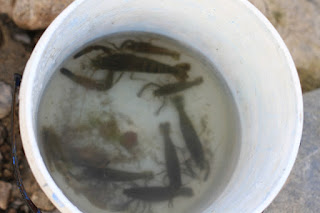 We finally found a small road to get down to the river and camped in the river bed. A family were by the river so I went over the mum and dad were in the water finding yabbies under rocks.
Email ThisBlogThis!Share to TwitterShare to FacebookShare to Pinterest
Labels: Peru 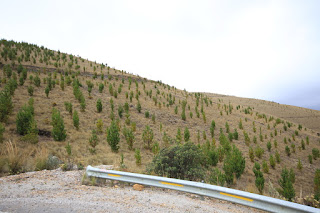 The rough ride continues but the views are astounding. So much nicer than the Pan Americana maybe not as fast but much more enjoyable. 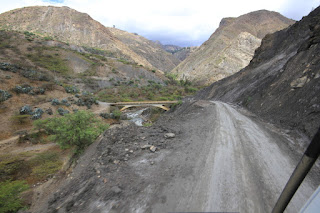 There are two passes back to the West. Because the road is so slow we will not be able to traverse both passes so at the last minute we decide that maybe as the southern pass has a big tunnel the road may be sealed. 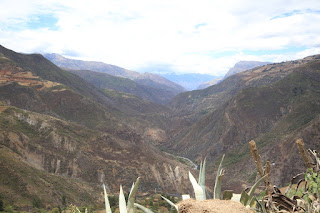 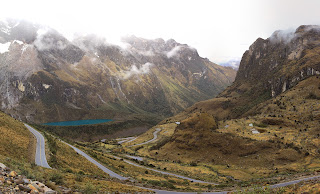 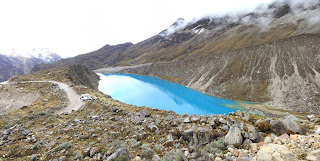 What a great climb we turned onto the old road used before tunnel was built and drove to where we could camp with a view of a lovely colored glacial lake. A little high for us at 4700m altitude but we thought we’d give it a go. 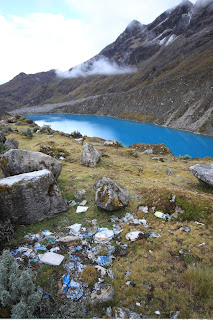 A shame such a lovely place and yet they still dump rubbish!
Email ThisBlogThis!Share to TwitterShare to FacebookShare to Pinterest
Labels: Peru

We continued on our loop. We turned off the orange road at Pasacanchato onto a yellow to head south. The road deteriorated and we were back to a slow pot holey dirt road. We were low on fuel and the fuel marked on the map was unavailable as the owner could not be found. We were told next village. After 3 "next" villages we spoke to a truckie and he told us fuel was available in Chinchoobamba. 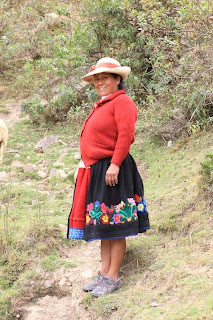 As we were dropping our tyre pressure a shepherd came to speak to us. she seemed very interested.
We left and went around the corner and she had run down to talk to us again. She allowed me to take her photo and was so very happy. Lovely to try and talk to the locals. She spoke Spanish , quetuine and another local dialect. 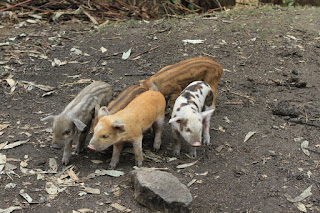 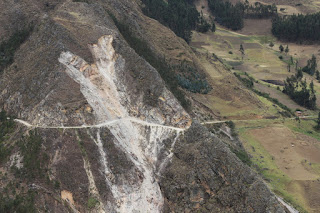 Road was not really as bad as it looked (thankfully)

We turned off to a white road and found diesel in cinchobamba. Again the owner was missing so a lady served us. Bought 2 x 5 gallon buckets of diesel and poured it in with a big long angle funnel. 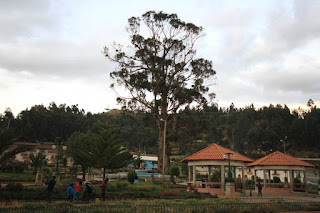 The biggest gum tree we have seen . And in the town-square!

Decided to continue on white road out to rejoin yellow further on. Found a lovel spot to stop for lunch and had sandwiches in the schoolbus shelter. A very slow road but nice scenes to enjoy. In Pompabamba we decided to fill tanks with fuel.

Started talking to some girls then noticed the markets. Went shopping and Maria came with me and helped me buy vegies and fruit. She did not want us to leave saying there was a festival that night but we swapped social media accounts and drove on. Stopped on a wee rise 30 feet from the road.

Email ThisBlogThis!Share to TwitterShare to FacebookShare to Pinterest
Labels: Peru 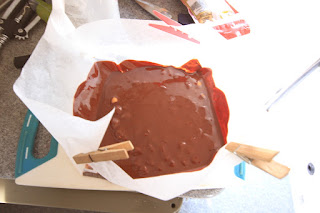 Melted two chocolates together, one just cocoa and the other a 50% chocolate with almonds and then just the cocoa with honey. Also fried up some peppers to preserve

Spent some time catching up on blog. 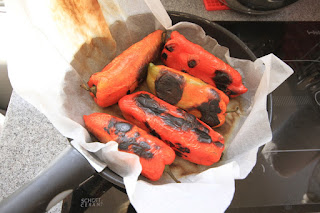 We stayed on this yellow road just hoping that the bridge would be strong enough.

A very rough road (dropped tyre pressure to 40psi) then tar-seal and a tunnel to a mine site then back to rough dirt. Very rough...About half way we asked a ute if we could cross the river and they said yes. After a slow 45km’s we crossed the bridge with a sigh of relief. We travelled 45km instead of 85km. Nice to be out of the traffic and rubbish. 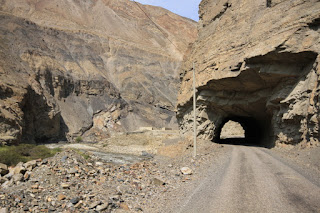 The road (red) sealed but narrow followed the river as the mountains grew on either side.

The road sometimes went through small tunnels and sometimes became very narrow where the river had collapsed an edge. 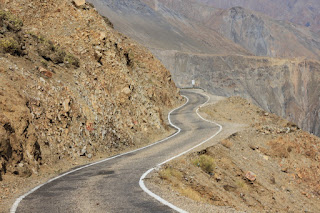 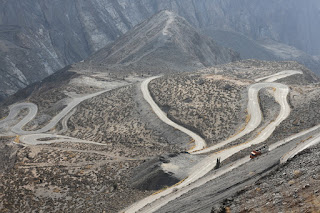 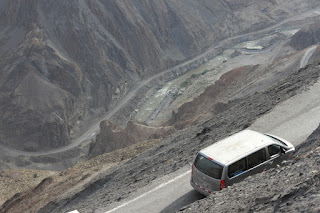 7 hours on the road and 130kms but a very enjoyable drive. Clean not much traffic and wonderful barren mountains to look at. Best drive in days.. 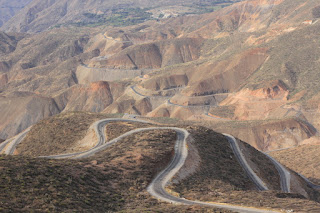 The road in places is very narrow and very steep 500m drop with tight corners. I don’t know how the buses and semi’s negotiate it but I do know they use the WHOLE road, One gives way to them. I had to back so a truck could pass. John got out to help and walked to the other side of road. The passenger in truck started yelling at him and got out of truck to confront John. Anger was laughed away when john showed him the driver was still at the wheel….

We stopped on the inside of the road for the night at 3058m alt.