Parque Pumalin is exceptional.  It is the most tastefully developed Park that I have ever encountered. 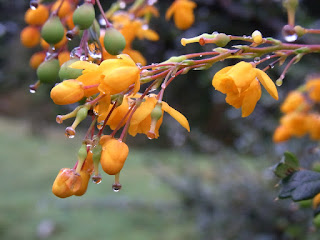 When we first encountered Pumalin it was in what I expect is it's natural state; steady rain. The water was cascading off the towering rocky peaks in spectacular fashion, and scarcely delayed in the impenetrable green before returning to the remarkable calm ocean. To see the Park in a downpour must be something to behold.

We entered via ferry and traversed the length of Pumalin by the sole road. From time to time the solid walls of greenery on either side of the road were interrupted by an invitation to a short walk or camp ground. Each of these entrances was announced by a timber sign or portal of generous and commanding proportion.
The trails that we walked followed a meandering path thru mesmerising forestry, each to a fascinating destination. The paths themselves were tactfully maintained somewhere between scrub-bash and tourist highway; allowing a sense of isolation, freedom and discovery.

My favourite walk was the 600m climb to the rim of Volcan Chiaten. After having lain dormant for 9000 years, this volcano burped in 2008. The resulting devastation was attested to nine years later by a  forrest of skeletons still towering above the subsequent undergrowth. The trail began on the flats, crossing a clear stream in an upended riverbed, before climbing increasingly steeply towards occasional glimpses of the still smoking summit. The gigantic skeletons were not so much burnt as simply smashed. Only the most sturdy trunks remained upright after the onslaught. As we climbed, the undergrowth thinned to rubble and only a few sentinels stood over the heaps of ancient timber in violent ruin. The smoking inner cone loomed into view as we crested the scorched volcanic lip. Between our vantage and the cone was a vast moat of dried mud and thermal lakes. Somehow the whole scene defied any visual sense of scale. The low rhythm of an approaching platoon of Orcs seemed imminent. In the end, the weather chased us off the slopes far too soon. 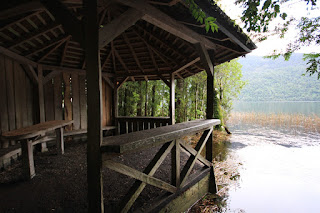 The architecture and presentation of the Pumalin camp-grounds was inspirational. We saw beautiful, simple, octagonal timber shelters poised on the water's edge, and nestled in their own private shroud of vegetation. There were paths, steps, edged lawns, rubbish bins, toilet blocks and parking spaces all beautifully integrated with the native surrounds. There was a sense that the elven lights would wink on at night, one by one, after stomachs were filled, and company mellowed.
Email ThisBlogThis!Share to TwitterShare to FacebookShare to Pinterest
Labels: Chile
Newer Post Older Post Home