It drizzled a couple of times during the night. The stove did not start so after 3 tries took it apart and drained the excess fuel (1tblsp) and dried the combustion mat then just put it together. It worked so had my cup of tea. Moved on just after nine back to parque entrance.

Parque was open so we registered and went through. Were asked if we had animals or guns. When john asked about kayaking the ranger wanted us to leave kayak at headquarters. We ensured him we would not use it, so were allowed to leave it in the locker.

A fantastic drive in. The road followed a small river, the  gully was quite narrow at times, then as we crested the rise (3700m) the view was stunning. White mountains with the greys, reds, greens & browns of the ground. Back in Vacuna country. 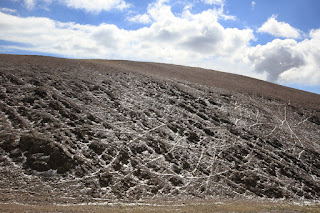 The animal tracks with a  dusting of snow looked intriguing.

The lake is as advertised – blue with a conical volcano sitting on the other side. The top of which is the border with Chile.

Stove would not lite again so made a quick loaf of whole meal bread (coudn't precook the grain for wholegrain). The stove stopped straight away with glow plug problem tried twice more then pulled apart. Checked all the wiring dried the combustion mat. Put together then we (John) could cook lunch. 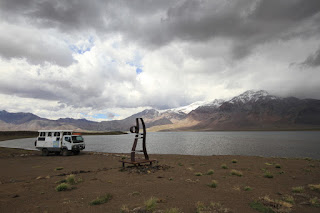 Sat around till about 3pm then drove over to the other side of lake where the camp ground was. Found a site up a little above the lake. Climbed up the mound of lava flow separate chunks of rock. Lots of flowers around to photograph. Another 5 star camp makes 3 in a row.
Email ThisBlogThis!Share to TwitterShare to FacebookShare to Pinterest
Labels: Argentina
Newer Post Older Post Home