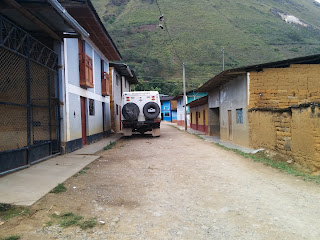 Met Jhany in town square and followed her in EC to her house. Quite a big house with one bed room downstairs and 3 upstairs for her children and one above the courtyard for Haley. There were a few chooks in a pen and a few guinea pigs. The house was larger than it looked from outside. 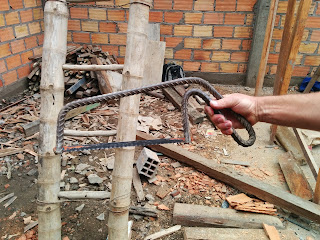 Jhany took us to meet her husband who builds houses. John loved the hack-saw made from reinforcing rod. Very robust. 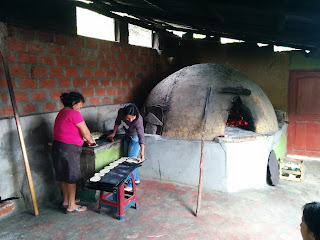 We then watched a couple of women flatten risen buns ready for their next rise. A good fire was already underway in the oven. We walked to a shop to buy some buns and 2 pkt's rolled oats. The ladies were outside in the courtyard(out back) bundling coriander and chives into 1 kg lots. They gave us a small bundle of each.

Down the steep decent.

The road was in narrow high gully’s and the Witch had trouble with fixes on satellites. The towns were all full of speed humps so a very slow trip.
Passed police riot squad blocking teacher(?) demonstration getting onto main road.
At the turn off North towards Ecuador there were parked two badly cashed cars, we think as a warning to motorists. Lots and lots of rice grown here. 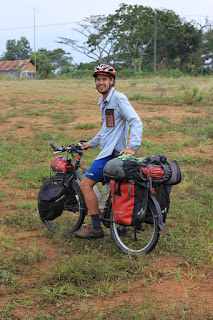 As we were looking for a camp we came upon a cyclist grinding his way up hill. He took hold of the mirror mount and chatted as we pulled him uphill. Leroy an Aussie from Albany WA. 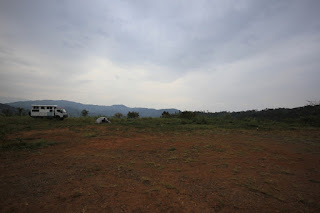 Found a camp together on edge of the towns footy field. Some Kids came over and interacted with Leroy. John took him a cold beer and we invited him to dinner and to have an outside hot shower.

Leroy has spent a year, 10,600km travelling up from Ushuaia Leroy bought some cold beer and some chocolates of which he gave the kids a chocolate each. Great to speak to someone who speaks the same language.
Email ThisBlogThis!Share to TwitterShare to FacebookShare to Pinterest
Labels: Peru
Newer Post Older Post Home